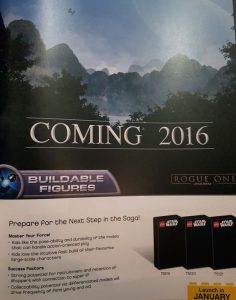 Another early unofficial reveal today, this time for the Rogue One: A Star Wars Story Buildable Figures we heard about earlier this year.

As more information on the film is released via the trailer and other official news articles, we’ve come to learn that the lead character is name Jyn Erso and portrayed by Felicity Jones will be the focus of the film and the story follows her attempts to gain intel about the new Death Star (Prior to Luke and friends destroying it).

A image was released on Reddit (we’re not going to link it here as it’s not official and obviously manipulated) that shows the 3 LEGO figures, and as usual the non-human characters translate better.