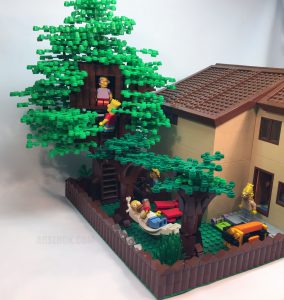 AFOL builder ArsLock decided that his LEGO Simpsons House (71006) needed a backyard like you see in the show, so like any good AFOL, he built one. After some experimentation and a minor cat-related disaster, he has a new version that looks great, fits the set and show, while allowing the house to still open.

The details are all there, including Homer in the hammock, the treehouse etc. I love that he’s taken a well-regarded set and improved upon it to make it even more “real”.

He posted it on his own site ARSLOCK.com and also shared it in the Reddit /r/lego and /r/TheSimpsons channels. His site Arslock.com has a bunch of other great LEGO MOCs on it worth have a look at for inspiration.