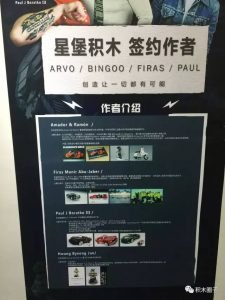 At the Guangzhou Toy & Hobby Fair this week several brick-built models featuring work by CrowKillers, Bangoo H and The Arvo Brothers among others were on display causing initial cries of “foul” by AFOLs and others.

Recent stories suggest that various Chinese companies may be reproducing and selling AFOL MOCs without compensating or even contacting the original builder.

We’ve now learned that the models on display at Guangzhou are not being stolen by Xingbao, a subsidiary of toy company Lepin, but rather actually allowed by the AFOLs. Now, before we proceed, let’s make it clear the these sets are not necessarily “officially licensed” from the original copyright owners. The car companies and motion picture companies may yet weigh in on this.

What this may indicate is that these AFOLs have decided it’s better to ally with a company willing to produce and sell their MOCs and receive some compensation, rather than just have those companies stealing designs outright. Conflicting information abounds right now with some saying they did not agree to this and others saying they did. 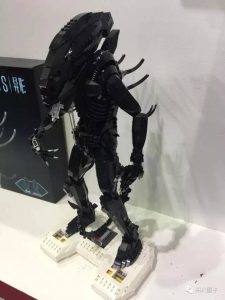 The debates are raging long and hard across various forums and post comments with every possible opinion on this. Some people think it’s great that these models will be available even though LEGO doesn’t support them. Others think Xingbao and Lepin are trying to be greedy and “supportive” at the same time. Other still think that it’s all evil and only LEGO should be able to produce anything with buildable bricks.

My opinion, should anyone want to know, falls somewhere in the middle. I’m glad to see that these companies like Lepin are attempting to bridge to the AFOL community instead of just stealing things flat out as they’ve allegedly done in the past. The downside here still remains that the actual creators of the source material are likely not being compensated. To properly release a model of a character from a movie or a likeness of a car requires that the owner of the image be on board. For example the production company who owns the rights to the character need to be included.

Partly this seems to be down to what are said to be virtually non-existent copyright laws in China and other countries. This could mean that a company who owns the rights to a character, design or figure has almost no hope of blocking production or recovering any compensation. It also likely means that countries where these laws are enforced may never see these sets. A film company located in the US would likely fight hard to keep their intellectual property from being illegally imported in this form.

BrickSet.com has a statement from Paul ‘CrowKillers’ Boratko which seems to confirm his involvement, but I have seen other sites stating that he is not involved.

What do you think? Would you buy these sets knowing that the designers would be compensated for their time and efforts, even though this isn’t officially a LEGO product?

More information and pictures are on the Customize Minifigures Intelligence Facebook page.

I’m not a lawyer nor do I know anything about import/export. I also don’t personally know the people involved so if I got anything wrong here, let me know.