Updated 12/12/2016: The display has been moved out of the Skytrain Station to Coquitlam Centre but is not yet on display.

Ok, the station itself is built using steel, concrete and glass like you’d expect. To celebrate the opening of the highly anticipated Evergreen Line, Translink – Vancouver’s regional transit authority – asked VLC to build a model of one station out of LEGO. The new Skytrain line opened December 2 with press and dignitaries on hand to launch the line and the LEGO model was revealed. 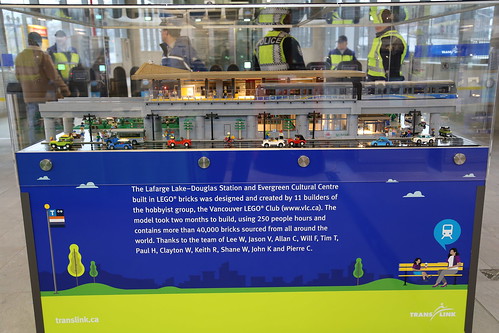 This past year the VLC has created displays and events like the VanDusen Garden’s Festival of Lights, the Surrey Museum, Vancouver Train Expo and even one for Science World’s Expo 86 30 Year Anniversary and the club assisted with putting on the region’s first full-scale LEGO Convention, BrickCan earlier this year.

“This project will be at LaFarge Lake Douglas Station for the new few days, before moving on to Coquitlam Centre Mall.  In the spring it will move to the Evergreen Cultural Centre for an exhibit, before finding it’s final home at the Coquitlam Library.“