As was rumored, the LEGO Group has held back 1 set from the Captain America: Civil War line until after the movie debuted to keep one big spoiler from being revealed. Now that the movie out they’ve announced the set. In some ways it’s surprising since the Giant Man/Ant Man spoiler was released long before the movie. Anyway, on to the new set. 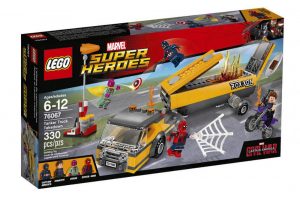 It’s Spider-Man! Yep, the set is called 76067 Tanker Truck Takedown and features our favorite web-slinger in a scene inspired by the epic battle sequence at the airport. Spider-Man’s appearance in Captain America was kept relatively secret until the last trailer a few weeks before the movie was released, so speculation was high that he’d be in the mystery set.

Listed at 330 pieces, Tanker Truck Takedown has a couple of interesting features. There are 4 minifigures included, Captain America, Hawkeye, Vision and the LEGO MCU’s first Spider-Man figure. It’s not the first or only Spider-Man, but the first from the MCU, which indicates we’ll likely see a lot more once the Tom Holland Spider-Man: Homecoming is released.

The main element is the titular Tanker Truck, in this case a Roxxon airport fuel truck. You also get a runway wind-sock (whee!) and Hawkeye’s motorcyle (Wait, what?).

76067 Tanker Truck Takedown looks like a fun set and the minifigs alone will make it popular. The 330 piece count suggests a price of about $35 – $40 US, likely coming in at $39.99 due to licensing, making it a bit expense for some.