Today I bought a set that’s different from most I’ve bought so far, and I was really surprised how much I liked it. I bought the LEGO City Ambulance Plane (60116) because I needed a flying vehicle that wasn’t part of LEGO Star Wars (I have the Advanced TIE Prototype that I will use for my project).

Most of the sets we’ve bought and built lately have been in the Star Wars, Architecture and Creator Modular series so I wasn’t entirely sure how this set would feel building it. My trepidation was quickly put to rest by this fun and good-looking build. 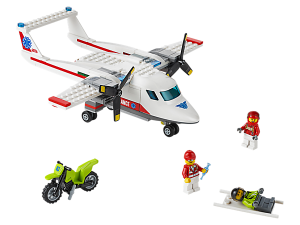 The Ambulance Plane is a bit more than a plane, it has a “story” that gives kids something to do with the set beside just swooshing it around if they don’t have any other LEGO toys. In this set, the story is that the Ambulance Plane is on site to help an injured motorcycle/dirt bike rider.

In total, you get 3 nicely done minifigures with this set. The paramedic/doctor, the pilot and the motorcycle rider. All 3 have both front and back printing on their torso, but are pretty basic otherwise. Each has a single expression and their legs are single color, but the faces are nicely done with the paramedic having shiny sunglasses. The other nice bit is that the pilot is a female figure.

You get the green motorcycle to match the rider’s jersey and a stretcher too, and a total of 183 pieces, with no really special ones included.

This is where I was worried at 2 times. First when I bought it I wondered “Will it be too simple?” and then when I saw the manual I thought “Wow, this is pretty thick.” Thankfully neither was anything to worry about.

The build is simple, this is clearly a set aimed at the 5-12 year old bracket, but I still enjoyed building it. Seeing how they built out the structure of the wings and the tail section and having a clamshell opening to allow the stretcher to fit inside.

The manual is thick, but again, this is a set meant for kids to build so each step has 1-4 pieces that are easy to locate and build. Unlike the modular buildings that say thing like “Ok, take 48 of this piece….”

The set goes together quickly and easily with no complex techniques, but the end build is very sturdy and the plane is completely swooshable without fear of it falling apart as it flies.

Oh, and the one controversial part – there are 17 stickers to apply! None is exceptionally difficult to position nor are they vital to the appearance of the set for the most part. I would say that the small triangles on the side of the jet’s nose really help bring the color through and the tail stickers help with identity. But not critical.

The Ambulance Plane (60116) set is perfect for my need to use it as a model, but I’ll likely consider breaking it down for parts afterward, but at the same time, I wouldn’t rule out buying another one for even more parts – the propellers are quite nice and the wheels would be useful.

For kids, I think this set would be a hit. The motorcycle would be fun to play with and the plane too. By having both elements in the set, kids can make up stories for the pair instead of having just 1 element to play with.