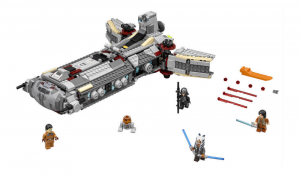 Hot on the heels of the Captain America: Civil War set announcement comes one on Eurobricks about the Star Wars: Rebels new set. Set number 75158 will be the Rebel Command Frigate. Based on Phoenix Home it’s a Pelta-class frigate used as the Rebel flagship before being destroyed.

The long-awaited Ahsoka Tano leads the set of minifigures and is accompanied by C1-10P (Chopper), Ezra Bridger, Captain Sato, and Agent Kallus. Ahsoka’s face has been redesigned and she has blue lightsabers for some reason.

The design of the front of the ship appears to be pretty accurate but as you move further back it loses that accuracy, probably due to part count and design restrictions. Unfortunately (to me), the trend of including the shooting pieces continues.

The set features 936 pieces which will put the price tag around $99.99 US if not a bit higher, but nothing official is announced yet. The other thing to note is that this will be a retail store exclusive set, meaning only available from whichever store has it. As usual, speculation is Toys ‘R’ Us in North America, but we will have to wait for details.