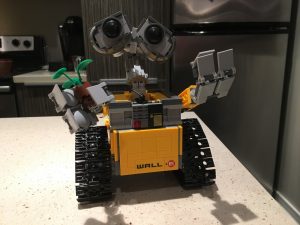 ([easyazon_link identifier=”B00ZSJMPLU” locale=”US” tag=”brickbrains-20″]LEGO Wall-E, Model 21303[/easyazon_link], 676 pieces, 69.99 CAD, Ages 12+) This is going to be a one-note love letter to my Wall-E build, but not for lack of trying to find fault with it. Much like his eponymous movie, putting Wall-E together was a fun time that was more complex than I had originally imagined. This made the project even more fun than I’d originally anticipated. Wall-E here is a product of the LEGO Ideas program, designed by Angus MacLane, who not coincidentally was the Directing Animator for Wall-E at Pixar Animation Studios(!)

Out of the Box

*Something to bear in mind is that this is the second Wall-E model, to address the original’s problems with the load-bearing nature of his neck.*

When opening his box, you’ll immediately get an idea of how cool Wall-E will look- there’s an impressive pile of bright yellow and cool grey pieces that contrast each other nicely. It’s easy to see that LEGO worked hard to make the colours really pop, even down to the shiny black pieces that ingeniously snap together to make our lil” robot buddy’s (rolling!) treads.

With some of the builds I’ve done lately, the online instructions can be less than hi-def and the diagrams confusing. Not so with this one – [easyazon_link identifier=”B00ZSJMPLU” locale=”US” tag=”brickbrains-20″]Wall-E[/easyazon_link]’s instructions PDF from LEGO.com showed up on my iPad crystal clear, and while a complex model in three dimensions, all of the steps were easy to follow. His book was similarly easy to follow, but I prefer the iPad to trying to hold the book open while building. 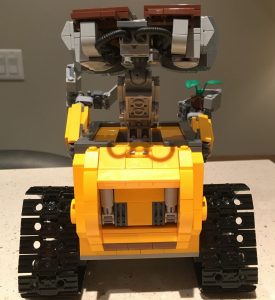 When it comes to models based on movie vehicles or characters, the designer can either be true to the source material, or take shortcuts to get it done as cheaply as possible. LEGO doesn’t tend to go for the second route, and they definitely didn’t do it with Wall-E.

The build has three main components: Wall-E’s head and eyes, his body, and his treads and arms.

Wall-E’s bright yellow box of a body comes together solidly, but is still hollow, and has his trademark flip-open hatch in the front for anything he finds and wants to take home. His neck assembly pops out the top of his body at a jaunty angle, but is both flexible and load-bearing for his head – of all things, it reminds me of Apple’s iMac screen-bearing gooseneck from a few years back. It’s amazing that pieces of plastic you put together yourself form such a cool piece of engineering; a great resolution to the original’s neck issues.

Wall-E’s eyes are much the same – you put each module together and then attach them to the head in such a way that two black plastic circles turn into the most expressive eyes I’ve seen in LEGO.

Wall-E’s treads and arms are also impressive, in that they’re as articulate as they are- the treads snap together tightly around the “leg” gears, making Wall-E look very accurate, if not very mobile. His arms, while nothing to write home about, end in his familiar articulate finger flaps, and even come with a little plant for him to wave around.

I’ve gone on about this model, and made it sound like I’m paid by LEGO- I wish. I built this model with an eye out for missing pieces, overly-complex design, and especially for a floppy neck or eye joint. Instead, this was a challenging and fun but not overly-difficult build that clocked in at about 2.5 hours. As well as being a great-looking model, Wall-E is a pretty playable toy as well, despite his not very roll-y treads.

I tried, guys- I just couldn’t find anything to really complain about. [easyazon_link identifier=”B00ZSJMPLU” locale=”US” tag=”brickbrains-20″]Wall-E[/easyazon_link] now has pride-of-place at the top of my model cabinet, looking like he’s about to destroy the White House. 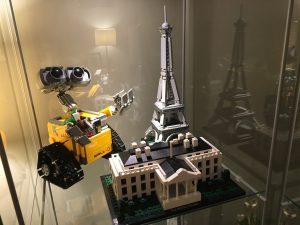