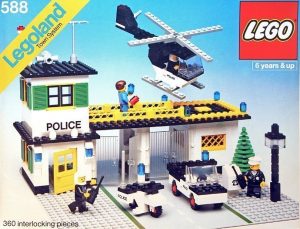 Way back in 1979 LEGO released a set that started my brother and I on the path that would eventually fill the finished crawlspace under our house. LEGO set 588 – Police Headquarters was that set. It wasn’t our first LEGO by any stretch, but the scale and the minifigures held some magical appeal that previous sets hadn’t.

We worked our parents pretty hard to get that set, and many to follow, but this Police Headquarters was the nexus of many of our town building adventures and was seldom torn down or replaced. I wish we still had that set, and all of the other LEGO sets we had – it was a sweet collection, but times change, people move and things get sold.

588 – Police Headquarters is a fairly small set at 372 pieces but back then things were different. The set features 4 police officers dressed in black – a helicopter pilot, a motorcycle office and a patrol officer – and one in blue. There’s 3 different vehicles as you may have guessed from the picture – a motorcycle, a car and a helicopter.

The building itself was pretty cool I thought. A 2 story office/control area and the small jail cell on one side. The way it was built across the road also impressed my younger self. Today I can see a few things I’d change, but I think overall this simple set holds up pretty well for being 37 years old.