LEGO fans will have probably seen Janet VanD’s work before in the form of her intricate and detailed model of Her Majesty’s Theatre in Haymarket, London. This time her work is “simpler” if you call over 18,000 pieces in mostly white and transparent simpler. 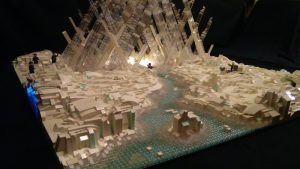 Irish Brickbuilder JanetVanD’s latest creation is a very faithful rendition of Superman’s Fortress of Solitude. If you’re not familiar with it, we recommend you watch later seasons of Smallville or Christopher Reeve’s Superman (1978), but mostly the latter which is the version upon which the model is based. Superman’s Fortress of Solitude serves as a “home away from home” and a place for him to center himself. Depending on your source material, it contains the ship that brought him to Earth, memories of his parents, a computer and mementoes of his time on Earth. And lots of other things. 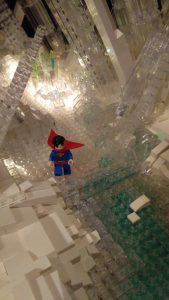 Regardless, the Fortress is constructed of snow and ice, hence the simple color scheme used in the LEGO model. Janet’s work on getting the soaring ice towers to sit at an angle and her use of subtle lighting streaming through the transparent pieces is a testament to her prowess as a builder. I like the small glimpse under the ice on the side of the model too.

Overall, Janet says the model contains 18,684 pieces and she put in about 160 hours of work. We think it was well worth it when you start seeing some of the subtle, but important, details like shifting color in the ice, General Zod attacking and more. We’ll leave that as an exercise for the reader.

Janet uploaded only a handful of photos to her DeviantArt account, so be sure to head over there and check them out and have a gander at her other work as well.