The Ferrari F40 (LEGO Creator series model 10248, 1158 pieces, $119.99 CAD) is a pleasant experience, but this was the first build I’ve ever done where I started to feel like it was work instead of fun. The end result, though? It was well worth it! 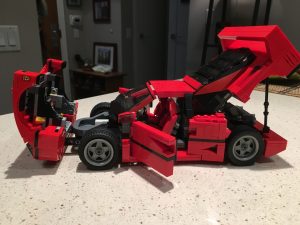 LEGO’s “Expert” level builds do tend to be very convoluted and intricately designed, so I wasn’t surprised at the level of detail involved. However, by mis-placing by a single stud in two different elements, I had to take everything apart and retrace my steps from 10 pages back. This kind of error is very easy to do, given how unclear the directions can occasionally be. However, given how intricate the build is, it says something that this only happened twice.

It was still immensely satisfying though, when the separately built hood and trunk modules slid squarely into place on the main chassis with an audible click. You can really see the hard work the designer put into creating this model. 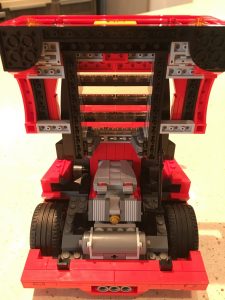 It would have been easy to leave the finished product as just a well put-together Ferrari, but the additional touches make this an exceptional product. The seats and headrests can be moved back and forth, and even the steering wheel can be tilted. The engine block by itself took a good half-hour to build, and is extremely detailed. There’s even a hood-prop so you can leave the back hatch open to see that engine you spent so much time building.

There’s an odd trade-off with the Ferrari F40 here; previous builds I’ve done have been simpler, but would not result in a model that could be called a playable toy. Here though, it’s a different story. At 1158 very tiny pieces, the Ferrari F40 is a stone monster to put together. The end result though, is a big, sturdy sports car that will not fall apart while a kid is rolling it around on the floor.

In terms of both money and distraction value, it’s definitely a great choice – it’s $119.99 CAD for almost 1200 pieces and stickers. The build time took about 6-7 hours, which I think is in the butter-zone; while being a plus for entertainment value wasn’t overly long either. Nobody wants to be done building a $100+ LEGO model in an hour, but maybe they don’t want to spend a week on it, either. 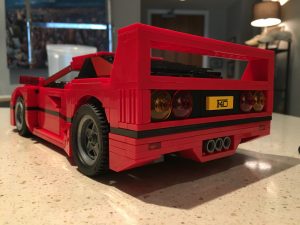 All in all, the build result here is a great-looking, crazy-detailed model that can both be pretty on your shelf and hold up to being “vroooooom”ed around on the floor, if that’s also your thing.