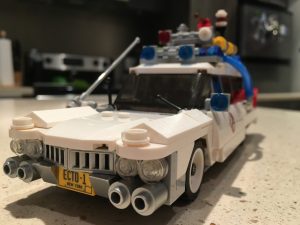 If you’re looking for a tl;dr? This build was awesome.

The [easyazon_link identifier=”B00JRCB3HQ” locale=”US” tag=”brickbrains-20″]LEGO Ecto-1[/easyazon_link] (model 21108, CAD $49.99) was released in June 2014, but with the January 1st release of the LEGO Ghostbusters Firehall Set, it’s had a bit of a resurgence in popularity. Ecto-1 is also known as the “ghostmobile” from the movie Ghostbusters for the unfortunate people who haven’t seen the 1984 classic. 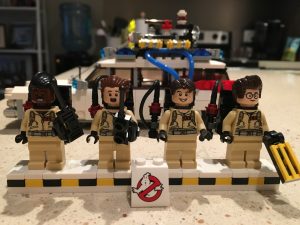 I wasn’t expecting more than the car itself, so upon checking out the box at my local LEGO Store, I was happy to see that they’ve included not only Dr. Peter Venkman, Ray Stanz, Egon Spengler and Winston Zeddemore, but also their proton-packs and a ghost-trap. The first part of the build creates a little studded stand adorned with the Ghostbusters logo for them to pose on, as well. I hope that this is a direction that LEGO keeps to in the future- it was annoying when I’d buy a set and its minifigs seemed to be just thrown in as an afterthought.

I was surprised to have the whole Ghostbuster crew included, given the price of the set. In terms of overall value, I tend to balance the price of a set against how many pieces are included, how much time I’m occupied by the build, and the quality of the end result. Bottom line, this set was definitely worth it, at CAD $49.99 and 508 pieces. 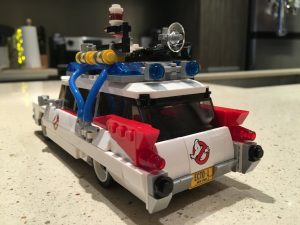 The car itself is very well done- while the build was enjoyably complex, it wasn’t overly so and I finished it in about 90 minutes. No stickers were required, either- a particular annoyance of mine, so I was glad to see that the license plates and Ghostbusters logos were printed directly on the bricks themselves.

I don’t really “play” with my LEGO sets per se, so the playability aspect of the set doesn’t really factor into it for me. However, if you’re considering this set as a toy instead of a model, you should consider that the car can’t fit more than a single minifig inside it, and you have to take the roof off since the doors don’t open. That being said, the Ecto-1 is very solidly put together when you’re done, apart from the roof, which is held on with just a single stud at each corner.

In conclusion? Great build, great model, pretty okay toy. If you ain’t afraid of no ghosts, this is the set for you! Yeah, I said it.