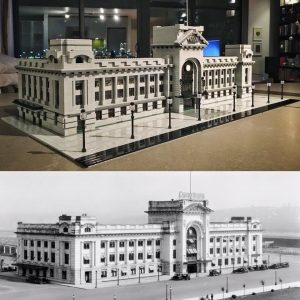 Vancouver artist Johnathon Vaughn Strebley shared his latest work, a recreation of the Pacific Central Station in Vancouver, via the Vancouver LEGO Club Facebook group the other day, and I thought it was an incredible piece. He’s captured Vancouver’s Pacific Central Station, originally built in 1919, in LEGO. He’s only been building MOCs like this for about a year and a half he says, and obviously has a skill for it.

The Vancouver Province newspaper later picked up his story and shared it with the world and it has started to go viral, casting a spotlight on Strebly, the Vancouver Lego Club and Vancouver.

Strebly is currently president of the BC Chapter of the Society of Graphic Designers of Canada, which might explain his eye for detail and style. Many on Facebook have suggested to Strebly that he exhibit at the upcoming BrickCan in Vancouver, but according to the Vancouver Province, he doesn’t have space in his 900 sq ft condo, which he shares with his wife, so builds are torn down as fast as they go up.

The Pacific Central Station build used about 5,500 LEGO bricks, took about 36 hours to build, and is “as historically accurate as possible.” He did quite a bit of research for a project that he started out of “Boxing day boredom.”

Below are a couple of other photos of the Pacific Central Station model, and another Vancouver landmark, the Save-On-Meats building on Hastings Street.