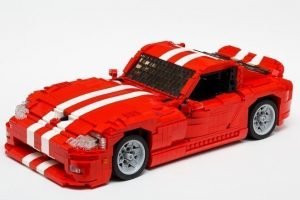 LEGO and Dodge Viper enthusiast Ben Smith is hoping to follow in the footsteps of successful LEGO Ideas campaigns like Birds, Doctor Who and WALL•E by having his model chosen by LEGO to become a full retail set. Smith is also following Michael Psiaki’s Ferrari F40 which was released this past summer.

Smith says, “Starting the last week of August my Viper project began with numerous searches for pictures, information and specifications. I spent countless hours reading throughout the build to familiarize myself with the car. I did not use LEGO Digital Designer, rather I built along side many vehicle pictures while ordering from Bricklink pieces I would need along the way. The car was built from the rear forward and completed the first week of December.” 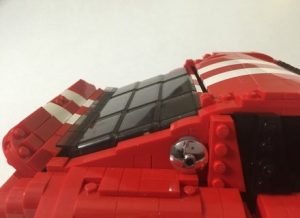 Overall, I think this project could look better than the Ferrari,which many have complained is blocky, like the Lamborghini model as well. Smith’s Dodge Viper definitely has the lines and evokes the spirit, but needs some refinements, which he is working on. Just recently he updated the project on the LEGO Ideas site including 2 new colors (Black, and black with silver stripes), a black oil filler cap on the engine, updated doors and a polished silver gas cap.

Be sure to visit Ben’s LEGO Ideas page to see more photos and follow the project. If you like it, go ahead and give it some love in the form of a support vote. Ben also has a Flickr Album dedicated to it, and incredibly details build details and photos over on this post on Viper Alley.