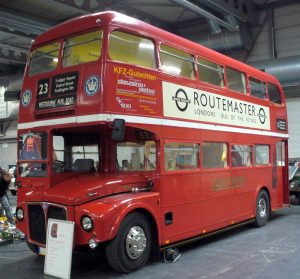 HothBricks is today reporting that an upcoming LEGO set (10258) will be an AEC Routemaster bus similar to the one shown here. Commonly referred to as a Double Decker for it’s 2 levels of passenger transport and easily identifiable from its bright red color.

Earlier this year LEGO introduced a mini version of this bus as a bonus when they released the Big Ben Creator set.

The new set would be added to the LEGO Creator Expert series and feature a removable top and a banner of the Union Jack along the side. It is said to also feature stickers (sigh) indicating it’s the bus that runs the 9 route through Picadilly and Trafalgar Square.

No official announcement from LEGO or of course any photos yet. HothBricks is reporting early release in mid-July with public availability for August 1. This could be the mystery set featured on the July calendar. Of course it could be a Europe only offering in the beginning. Price is reported as 129.99 € in France.