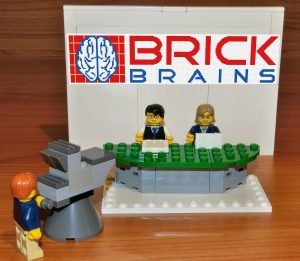 When I started this blog a little over 13 months ago, I had no idea what was going to happen. Would anyone be interested? Could I sustain writing for it? Would it increase or decrease my passion for LEGO? (Hint: Increase).

Since January 1, 2016 we’ve posted just over 320 articles here. Some were short blurbs about something happening right now, many reviews of sets and just a TON of news and rumors about LEGO releases. And while the traffic isn’t anywhere near some of the bigger sites, we’re doing just fine for a scrappy little 2 man blog that has to find LEGO news where it can. Hopefully we can get some LEGO press release love soon.

In 2016 we expanded our personal LEGO collection a LOT, starting with the new Architecture Skyline series and coincidentally ending with that too. We reviewed 23 of those sets this year with the highest ranking review hitting at 50 out 320. Maybe too many people are reviewing sets, or we’re just not doing them soon enough.

I travelled to both BrickCan in Vancouver, and BrickCon in Seattle this year, and in 2017 hope to get to more of these awesome events (including both of those again) and meet more incredible builders and fans. By the way, AFOL tickets for the full BrickCan convention are on sale now! I’ve also been fortunate enough to meet the amazing members of VLC, Vancouver’s Community of Adult Fans of LEGO, and seen some of them create amazing MOCs including the epic “The Wall” from Game of Thrones and the open collaborative “Fallout Shelter” from Fallout.

A few other numbers:

None of those are really that big, but I’m happy with them, and will continue to grow them and see where we are at the end of 2017.

So, 320 articles in the last year and great response to all of them, but we’re beginning to see that patterns. Here’s the top 10 articles by page views from 2016.

7. Rogue One and the upcoming LEGO sets – What will we get?

I’m really surprised that the Volcano Explorers article came in number 1. I was pretty sure it would be a LEGO Star Wars article as it felt like I wrote a LOT of those.

What will 2017 hold for us? Hopefully more and more good things.

Lastly, but most importantly, thanks to all of you for reading our little blog and don’t forget to tell your friends!