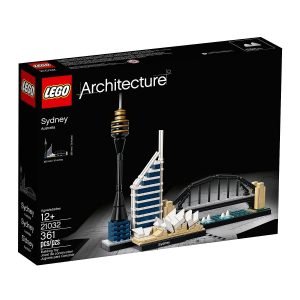 2017 started a bit early this year here as LEGO released many of their sets on December 26 instead of January 1. For a change, that included LEGO Canada brand stores, so we picked up the 3 Architecture Skyline series sets.

One thing I really like about these small city skyline builds is that they’re not repetitive. If you’ve built any of the larger LEGO sets (modulars etc), or even some of the smaller ones, the symmetry in them can create some repetition. These micro-scale cities are a series of 3-5 local landmarks each unique from the other.

The Sydney build is brilliant in the way it incorporates the water (with a couple of boats) and the Sydney Harbour Bridge into the set while keeping the Sydney Opera House right on the edge of the water. The opera house is a building I thought would be tough to miniaturize, but the designer nailed the look. The bridge uses a couple of flexible joints to create the arch and simple bars in jumper plates to finish the look. The water is all done with some very nice trans-blue color.

The other 2 buildings are the Sydney Tower and Deutsche Bank Place.

The Deutsche Bank Place was a bit tricky and I had to disassemble a couple of stories once as I missed a level. The use of the earth blue plates mixed with white plates and clips enables you to attach the white bars along the outside, but you have to keep track of which level you’re on as you build.

In contrast, the Sydney Tower build went quickly and was pretty straight forward. The gold antenna dishes alternating with the black create a perfect representation of the real building