I found a couple of guys in the Pacific Northwest who have launched a Kickstarter campaign to fund a LEGO themed museum in Portland, Oregon and they have just under 30 days to fund the full amount of $75,000.

“If you wanted to see a LEGO Museum, where would you go? Billund, Denmark, home of LEGO? Or you could visit the Czech Republic. Still too far away? Maybe Ohio is more suitable. But west of the Mississippi? Nothing. 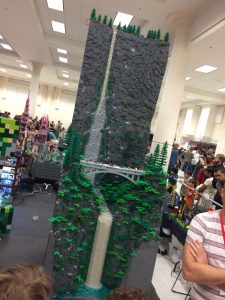 The guys behind this idea are Brian D’Agostine of Dag’s Bricks, his co-founder Erik Mattson and Blair Archer who spearheads the education initiatives. Between them, they’ve built some truly massive LEGO structures including a 10 foot tall replica of Multnomah Falls and an enormous lighthouse model called “Out To Sea”, each of which used over 100,000 bricks.

Their works have been on display at BrickCon in Seattle, their native Bricks Cascade in Portland and other LEGO events around the west coast. Brian D’Agostine is someone you may recognize for his fully wearable “Little Black Dress” made entirely from LEGO that went viral in 2016.

The rewards for backing their Kickstarter range from a postcard at $5 to multiple options, and tons of gratitude, for a $10,000 backing.

I have to agree with the need for something on the West Coast, there’s not much here except Legoland in Southern California, so having a dedicated LEGO themed museum that’s only a few hours away, and in a beautiful city like Portland, would be awesome.

“Private funding is secured but we also want to make this project available to the public to support. With what is available we can open and be ready to operate, but at a very limited scale. We aren’t interested in loans. We’d rather take that money that would be spent on interest and invest it back into our guests and visitors. And supporters!

We have negotiated a great lease rate on a space. As members of PortLUG there is no shortage of people that are willing to help us set this up and make it happen. We have friends of all skills and backgrounds that are helping us make this dream a reality including a teacher, a LEGO historian, and a business woman.

The majority of operating expenses will be covered by visitors to the museum experience. A retail store will also bring income as well as camp, classes, and events throughout the year. With this income we can continue to improve the experience and expand. We also plan to invest back into the local community by hiring employees and participating in philanthropic causes.”

So if you’re interested in supporting this, be sure to visit the Kickstarter page really soon, as the campaign needs to meet its goal by midnight Sun, Dec 18 2016.