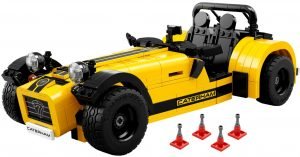 German site MultiMediaStore has posted images of the upcoming LEGO Ideas set (21307), the Caterham Seven 620R ahead of any official announcement from LEGO. We’ll probably see a lot more photos when LEGO does announce the set. Recently when this happens, LEGO follows on quickly with the official announcement.

In the meantime, we know this set will have 775 pieces and cost around $79.99 USD when it is released, likely in October.

Over on the EuroBricks forum, fan reaction is mixed with many saying that the proportions are off or that they prefer the submitted Ideas versions. It’s not uncommon that LEGO changes the build from what is submitted or that fans are slightly disappointed. LEGO will usually have worked with the license owner (Caterham) on the design and will have tweaked it until both are happy. I can’t say for sure this happened here, but it would stand to reason.

What do you think? Drop me a note in the comments below. Do you like it? Will you buy the set?