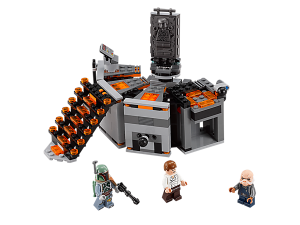 I picked up the [easyazon_link identifier=”B01AW1R5TU” locale=”US” tag=”brickbrains-20″]Carbon-Freezing Chamber[/easyazon_link] (75137) set this weekend from one of my local LEGO Stores this weekend because I’ve been a huge Star Wars (The Empire Strikes Back in this case) fan from the day I saw it way back in 1977 and thought it was an interesting little set, and I wasn’t disappointed. Some parts are great, others a little odd, but overall I like this set more than I thought, based on other reviews.

There are 3 minifigures, or 4 depending on how you count. I count 3. There’s the Ugnaught required to run the carbon-freezing equipment, Boba Fett of course and poor Han Solo. The optional 4th member is the frozen version of Han Solo. I don’t consider it a minifigure per se, but some do. All 3 of the traditional figures are well designed with Boba Fett and Han Solo being almost identical to those we’ve seen before. The Ugnaught is new and has a large single piece head and hair.

The carbon-frozen Han Solo apparently isn’t new either, but is still nicely and intricately designed. On the reverse, you can install the Han Solo minifigure and he fits in quite snuggly, and this is needed for one of the main play features. 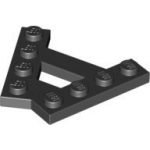 The set itself has very few really interesting pieces. There’s a lot of trans-orange 1×1 studs and trans-orange 1×2 tiles and 4 of the A-frame shaped wedge pieces shown to the right. I’ve seen these in a couple of sets and think they’re a pretty ingenious way of creating fixed angles.

The only other thing to note about this set is that there are no stickers. There’s one printed 2×2 tile for the chamber’s control panel, but otherwise no decorations in this set.

I tried building the [easyazon_link identifier=”B01AW1R5TU” locale=”US” tag=”brickbrains-20″]Carbon-Freezing Chamber[/easyazon_link] in my hands while watching TV and it was challenging through the beginning because it’s construction was a bit flimsy at first. Until you reach nearly the end of the first of the 2 bags, not much more than a hinge is holding some parts together. I eventually moved to a table.

Like I said, 2 bags with the bulk of the set being in the first one. You build about 2 of the 4 sections from that bag including the central chamber of the set, which is also the biggest play feature. Lots of other reviews have commented on this – it’s the “cool” part where you pull and twist a rod to “freeze” Han Solo. This is accomplished with a fairly intricate build which leaves you with a knob on the outer back of the set. Pulling and turning the knob will lower the center of the set while rotating the carbon platform 180 degrees to reveal either Han Solo or the frozen version.

I think that part is over-built and a bit tricky to work with, or I did something wrong. Getting the far end of the bright yellow pin into the hole that connects to the bottom of the device was trick, it feels about a 1/4″ too short. But once assembled, it’s been solid for me although others have commented on issues.

The rest of the set is pretty simple, forming 1/2 of the octagonal platform from the movie. Why only half? The way the feature described above works requires the frozen form to come down parallel to the ground/table and it extends out a fair way, so you couldn’t create a full octagon.

There are 2 other very simple play features in the set. 1 is a simple lift mechanism with a lock, for bringing people up to the top of the chamber. This works nicely as it’s just a brick arm sliding up a slot to raise a platform, and then you rotate the arm over to lock it at the top. The 3rd play feature seems to have everyone confused. It’s another knob/handle that lifts a 2×4 plate from horizontal to vertical. The picture on the box has Han Solo placed on it, so people are assuming it’s the torture device seen in the movie, but there is no real sign of what it’s meant for.

I liked the double wide stairs leading up to the platform and thought the trans-orange tiles and studs as safety-lighting (or ominous lighting) was a nice touch on an otherwise fairly plain-looking set.

Was the set worth my $30? I think so. The price ratio isn’t bad and there is a lot of playability here for kids. As I mentioned, it’s not the best looking set in some ways, but does a really nice job of capturing this moment in the film.

Overall, the set is decent and well priced for it's size. There's some good playable features in a fairly simple build that kids should enjoy.