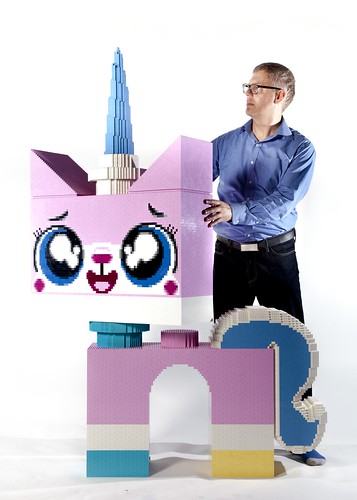 An article published on the site PlosOne provides a researched theory asking “Have LEGO Products Become More Violent?” resulting in quite a few articles commenting on the question and now I’m going to take my turn and share my opinion.

The article is authored by Qi Min Ser, Elena Moltchanova, James Smithies, Erin Harrington and Christopher Bartneck, well known in the LEGO community for his life-sized Unikitty. So the authors are familiar with the LEGO product and community.

I believe the answer is “yes.” When I was younger and my brother and I would build LEGO sets in the basement there were no weapons or representations of weapons.

According to this timeline from Quora, the castle series introduced us to medieval weapons like swords, halberds and bows & arrows in 1978 when it was launched. The LEGO Space series also contained “gun-like” items which kids would interpret as either guns or sensors or whatever but LEGO didn’t officially have a gun yet.

In 1989, more historical weapons were introduced with the LEGO Pirate series and featured period accurate weapons like flint-lock pistols, cannons and rifles. The supposed rationalization was that these were needed for the historical “accuracy” of the set. 1996 then brought us to the Old West were the guns were still part of the history of the period, but largely similar to modern weapons and the distinction almost disappeared.

The introduction of licensed sets after 1999 (Star Wars, Batman) brought many more “weapons” into the LEGO universe. For me, this brought the introduction of the “Stud Shooter” and those longer missile-like sticks and I find no way to say those are non-violent.

Now, does that make LEGO an inherently violent toy? No, because many kids still focus on the City line or play with the bricks in ways that don’t include violence.

One of the things that has definitely increased, partly due to the licensed sets, is the level of “conflict” in many LEGO sets. The stories introduced in these licensed properties almost necessarily include a level of conflict in order for the movie or TV show to have the drama and interest it needs. Without the conflict of Luke vs the Dark Side, Star Wars hasn’t got much story. Without Batman vs The Joker and others, there’s nothing there either.

This conflict begets violence. Kids playout the stories they see in the movies, on TV or in books & comics and they do it with the toys they have, often LEGO bricks.

The core LEGO lineup has avoided tanks, fighter planes and other military vehicles, including not arming police officers in those sets. There are a few exceptions, in a brief search I found an armed helicopter in the Agent lineup, in face several Agent sets contain weapons.

Personally, I prefer the core City type sets which don’t include any major violence. Sure, you’ve got a LOT of police, fire, rescue and emergency personnel so something is going on, but you can choose to not focus on those negative aspects.

We also have to consider the LEGO video games which feature an astounding amount of “violence.” I haven’t played them all, but most of them involve you shooting and blasting and hitting “bad guys” to have them break down. Hard to see any of that as non-violent.

Is LEGO itself becoming more violent, yes it is definitely responding to the changing world around it and includes more violent possibility and conflict based sets via their license partners. While the core sets don’t include guns or weapons (mostly), the inclusion of these external licenses means that LEGO is not as pure and innocent as you’d like them to be.