I was excited to buy 21304 Doctor Who LEGO set today from our local LEGO Brand Store and when I was finished building it, I wasn’t disappointed with it.

Doctor Who is a show I came to late, just about 4 years ago. I started watching it on NetFlix with the Christopher Eccleston version which started airing in 2005 and today stars Peter Capaldi as The Doctor and Jenna Coleman as Clara, the most recent companion. It’s a bit of an odd show by North American standards and it varies widely between totally silly and shockingly serious, with a bit of scary thrown in. Take a look at Wikipedia for more information on it.

Set 21304 Doctor Who arrived just in time for LEGO not only to promote it as a set for more adult fans, but to coincide with LEGO Dimensions release, where the good Doctor is featured also. 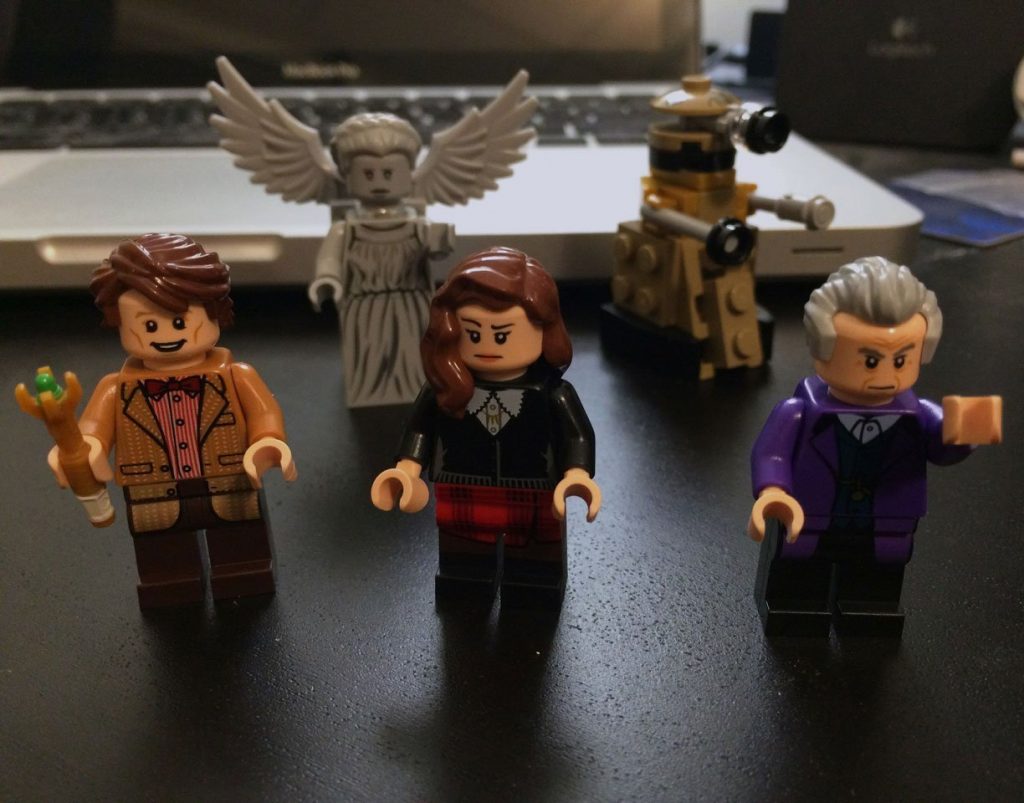 The set contains 3 traditional minifigures, 2 Daleks and one statue – a weeping angel. Clara and the 11th and 12th doctors are the included figures and even in miniature they’re well represented. The 11th Doctor (Matt Smith) was seen wearing a Fez a few times and LEGO has included one for him here as well, along with that doctor’s sonic screwdriver. The sonic screwdriver is a bit of a deus ex machina in the series at times, and also a bit like a lightsaber in that each doctor has a slightly different one.

A few fans have noted the Weeping Angels are out of place, as they were introduced through David Tennant’s run as The Doctor, but they were also seen a couple of times throughout Matt Smith’s time, and most importantly in the transition episode between Smith and Capaldi. The Daleks are just classic so their appearance just makes sense. The nit to pick, if any, with the Daleks is their older style of coloring. I’m not one to notice these things, but when it’s pointed out, I go looking for information. 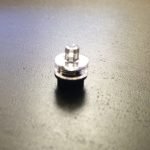 Having only just come out of my “dark ages” I don’t have a lot of comments on the parts, but I will say this – there are NO STICKERS. All of the pieces with patterns are pre-printed so those of us with unsteady hands can rejoice. The TARDIS is almost all dark blue, as you would expect using window frames and tiles to build the exterior and there are some unique or rare pieces there.

2 pieces stood out to me as “unique” are the collar on the Weeping Angel which allows you to attach the wings, and also the piece used to create the “eye” of the Daleks. It’s a transparent 1×1 circle with a “nipple” as shown above (attached to a solid black piece). 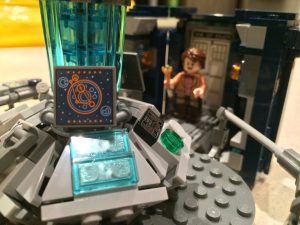 Construction was pretty easy for a set with 623 pieces, partly aided by the lack of stickers, but that’s also where it fell down a bit for me. Reading the instructions and trying to get the correct “control panels” in the right orientation was a bit tricky. There are 6 stations around the TARDIS core and 2 outlying stations. Each has a unique configuration but the instructions aren’t clear or big enough to know for sure which goes where sometimes. I even used the downloadable PDF version to zoom in, but it didn’t help much.

You first build the minifigures of the 3 “people” and the Weeping Angel and then proceed to build the interior platform of the TARDIS which comes together slowly, but it’s a satisfying build, especially as you’re clipping the blue rods and the control panel stations into place. I thought the railing was good, but a little skimpy in its design.

Once this is done you build the 2 Daleks before proceeding to the exterior. 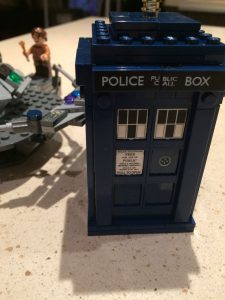 Is it the exterior? I guess, but with a ship like this can you ever really be sure? Regardless, you’re now on to building the blue police call box that everyone associates with Doctor Who.

The coolest part of the whole set, from a builder’s perspective, is the way the call box is built. The “back” has 2 hinged doors which open to give access to the inside which connects via a rod to the platform. The call box can be popped off the rod quite easily for taking it on an adventure of its own.

Two sides of the top panels of the call box flip up, a feature which doesn’t immediately make sense. When you’re done building, those panels act a lot like a lock when they’re down, preventing unwanted access to the TARDIS. In reality they prevent the doors just swinging open any time.

One of the more important concepts to capture in the set was the “bigger on the inside” feature of the TARDIS and I think it’s been done in a very ingenious way. Having the call box separate from the core lets you play or display both parts separately and thus you don’t have the constraints of space.

If they’d found a way to incorporate some wibbly-wobbly, timey-wimey bits, I’d be even more impressed. 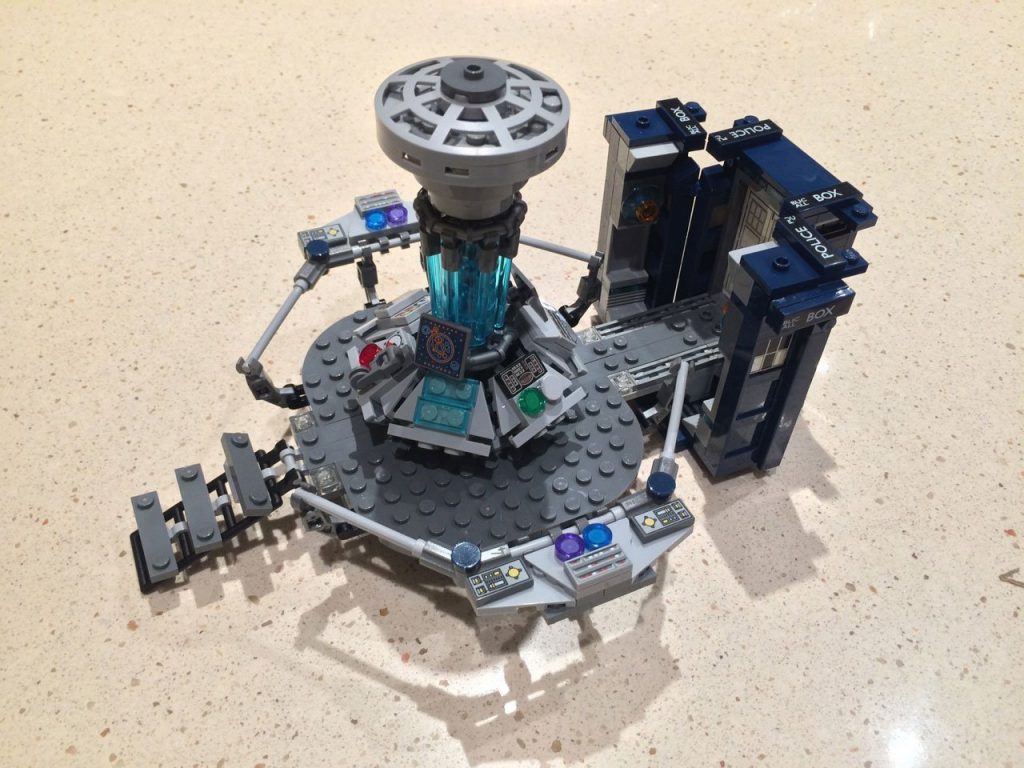 A solid set for play or collecting