In many parts of the world, 2016 has already been rung in. I’m on the West Coast of Canada, so we’re not there yet. I hope everyone who is ringing in the New Year is being responsible about it.

What we can celebrate now is that the first batch of 2016 LEGO sets is now available in stores and for ordering through the Shop@Home site. Many of these sets were on people’s Christmas list, but LEGO has held them off until January 1, 2016 to keep their retail market strong long after the holiday season.

The new sets have been fully cataloged over the last while, but I want to share some of the highlights with you here.

There are 4 new sets in the Architecture series: New York City, Venice and Berlin skylines and the Burj Khalifa.

The Creator series has a total of 12 new items including the much-anticipated Brick Bank along with the Corner Deli, Lakeside Lodge, and the obviously named Fast Car and Propellor Plane.

LEGO DC Comics SuperHeroes got 3 new sets based on the upcoming Batman vs Superman movie.

And of course the hugely popular LEGO Star Wars sets got an update with 12 new sets coming available. The new Star Wars sets include the large poseable figures, Battle on Takodana set and the Resistance Troop Transporter along with a couple of smaller sets. 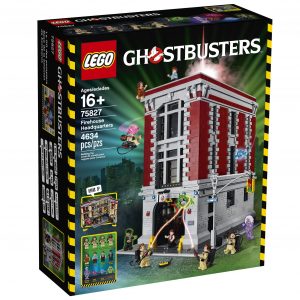 There’s now a Ghostbusters category with 1 item in it, the firehouse. For some reason the site wasn’t yet configured with a link to it, and clicking it took me back to the home page, but I think we all know it’s there.

January 1-10 LEGO is offering a free Nexo Knights Intro Pack (5004388) with any purchase. Some sources are reporting Double VIP points on January 1, but I can’t see that on the LEGO site at this time.

LEGO Shop@Home often has issues with their site as they make these updates, so don’t be surprised if you have trouble like I did, with either viewing or even buying. Patience is key.