Update: Images have been leaked. 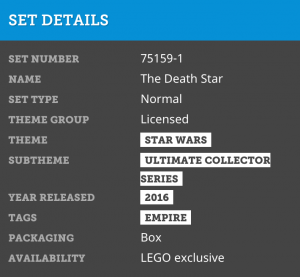 With the release of Star Wars: The Force Awakens just 1 week away in North America, the last few months have seen a flurry of information about Star Wars toys and other tie ins. Today is no exception.

Several LEGO news sites are reporting the appearance of 75159 UCS Death Star in the Brickset Database. The listing is tagged as a Ultimate Collector Series set due to be released in 2016 but there’s not much more information available. Without having seen The Force Awakens, we don’t know if there’s a new Death Star in it upon which the new model will be based, or if this is about one of the previous 2 Death Star weapons.

Previous releases in the Ultimate Collector Series (UCS) include 7181: Tie Interceptor, 10030: Imperial Star Destroyer as well as 10143: Death Star II and 10188: Death Star, which is more of a playset.

UCS sets tend to have between 1500 and 4000 pieces, and are as much works of art as LEGO toys. The exception to this seems to be 10188: Death Star, which really is a playset more than a model in my opinion.

We’ll be sure to post more updates as they happen.