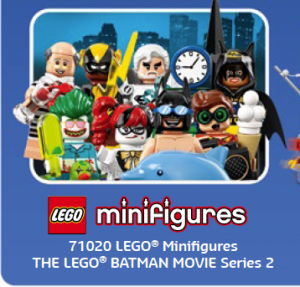 Being that today is December 1, we get the advance link to the January LEGO Store calendar, and there’s some good things coming.

Obviously one big event for January is the new Downtown Diner set being released on January 1. This vibrant 50s feeling set feature a big teal window frame and other nostalgic features.

The other big thing, sneakily hidden on the back of the calendar, is the release of 71020 – LEGO Batman Movie Series 2 collectible minifigures! The image on the right is our first official look at the series, although the collection page was leaked a little over a week ago. This new series doesn’t focus as much on Batman (there seems to be only about 3 in the series), but on villains and other characters from the movie. In the picture we see: Swimming Pool Batman (with Dolphin), Disco Harley, Vacation Joker, Vacation Alfred, Black Vulcan, Jor-El, Clock King, Soccer Mom Bat, and Vacation Robin

Another big feature in January is a free gift with purchase this month celebrating 60 Years of the Brick anniversary set.

You can click the images below for a bigger image, or use this link to reach the original PDF document.