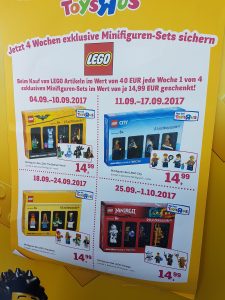 Images from an Austrian Toys R Us store now show us the 4 different sets of minifigures that they will be selling and giving away through September. Click the poster to the right for a much larger view.

We already saw the LEGO Batman Movie pack up close the other day, and now Brick Samurai has revealed an in-store poster showing all 4 packs and their dates. The packs will sell for €14.99 or be given free with a €40 spend on LEGO.

I don’t know how this plays out for North America or other parts of Europe. In North America, the packs are normally part of Bricktober events at Toys R Us, so that would be a full month after the Austrian promotion begins.