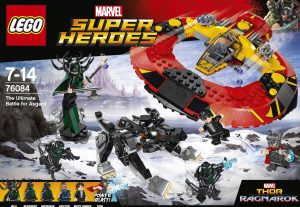 Thor: Ragnarok, the third Thor movie in the Marvel Universe will be released on November 3, and today we have official images of the 2 LEGO sets to support the movie.

First let’s have quick look at The Ultimate Battle for Asgard (76084), seen on the right, the smaller of the 2 sets. This set includes 6 minifigures including Thor, Hela, Valkyrie, Bruce Banner and 2 Berserkers. The main scene depicts Valkyrie flying a large ring shaped craft and fighting against Hela and her minions. The favorite in this would be the brand new Bruce Banner figure or maybe Hela’s headpiece. This set is priced at 49.99€. 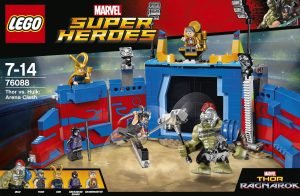 Next up is 76088 Thor vs. Hulk Arena Clash which looks to be a crowd-pleasing scene in the trailer with the obvious battle between Thor and Hulk. This set features Thor, Loki, Grandmaster and a Sakaarian Guard minifigures and a large Hulk printed with tattoos and wearing his battle gear. The Arena Clash will set you back 59.99€.

At present we don’t have release dates or confirmed US pricing, but it won’t be long before LEGO makes an official announcement.