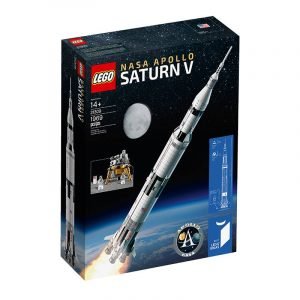 After some serious teases the last few weeks, today LEGO released all of the details about the upcoming NASA Apollo Saturn V set (21309) and it’s huge!

The set measure 39″ tall (1:110 scale) when completed and has 1969 parts, appropriately. Many of the parts appear to printed, hopefully meaning few stickers and encouraging their re-use in other settings. This is the largest LEGO Ideas set released to date, although rumors suggest the upcoming Old Fishing Store could eclipse that number.

The set is designed by LEGO Ideas members Felix Stiessen (saabfan) and Valérie Roche (whatsuptoday), both of whom have an impressive number of sets submitted to LEGO Ideas. NASA and LEGO are also collaborating on the upcoming Women of NASA set.

The set will be available to the public on June 1, 2017 which is shaping up to be a massive release day for LEGO fans, with the new Creator Carousel coming out on the same day.

Build the first rocket to land people on the Moon!

Display and role-play with this majestic meter-high LEGO® brick model of the NASA Apollo Saturn V. Packed with authentic details, it features 3 removable rocket stages, including the S-IVB third stage with the lunar lander and lunar orbiter. The set also includes 3 stands to display the model horizontally, 3 new-for-June-2017 astronaut microfigures for role-play recreations of the Moon landings, plus a booklet about the manned Apollo missions and the fan designers of this educational and inspirational LEGO Ideas set.

• Features a meter-high (approximately 1:110 scale) model of the NASA Apollo Saturn V with a removable S-IC first rocket stage with main rocket engine details, removable S-II second rocket stage with rocket engine details, removable S-IVB third rocket stage with the Apollo spacecraft and rescue rocket at top of the whole spacecraft, plus 3 stands to display the model horizontally.
• The Apollo spacecraft features the lunar lander and the lunar orbiter.
• Also includes 3 new-for-June-2017 astronaut microfigures.
• Great for display and role-playing the manned Apollo Moon missions.
• Includes a booklet about the manned Apollo Moon missions and the fan designers of this set.
• This set includes over 1,900 pieces.
• Measures over 39″ (100cm) high and 6” (17cm) in diameter.