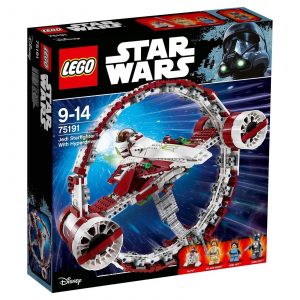 Thanks to Toys R Us Hong Kong and the fine folk over at Brickfinder, we have our first look at the Retailer Exclusive set – 75191 Jedi Starfighter with Hyperdrive.

The photo shows that it comes with 3 minifigures: Obi-Wan Kenobi, Boba Fett, Jango Fett and the droid R4-P17. There’s no part count on the box, which is normal outside North America, but the price is listed at HKD$999.90 or about US$129 on conversion. The licensing seems to have pushed the pricing up, or the price will be modified for North America. The set is due to be launched in Hong Kong on May 6, but we don’t have a date for North America. I’m going to assume the upcoming May 4th events will see this available.

Help Obi-Wan keep one step ahead of Jango Fett in his Jedi Starfighter! Dock with the hyperdrive, grab the handle and warp to distant planets in no time. Add some firepower with the stud shooters and spring-loaded shooters, then pull the trigger to release the ship. Will Jango be able to track you down? That’s for you to decide…

Play at warp speed with Obi-Wan’s Jedi Starfighter With Hyperdrive!

Speed across the galaxy with Obi-Wan’s Jedi Starfighter With Hyperdrive. This detailed LEGO® brick recreation of the ship featured in Star Wars: Attack of the Clones includes an opening minifigure cockpit, space for the R4-P17 Astromech droid top section and 2 stud shooters, while the large hyperdrive features 2 spring-loaded shooters, big engines, and a grab handle for enhanced play and quick release of the docked model. This impressive set also includes 3 minifigures and an Astromech droid figure.

• Jedi Starfighter features an opening minifigure cockpit, space for the R4-P17 Astromech droid top section (with storage space for the torso inside the ship) and 2 stud shooters.

• Dock the Starfighter with the hyperdrive and pull the trigger to release it again.

• Grab the handle and zoom the model around the room.

• Hyperdrive stands on any flat surface.

• Relive exciting scenes in space from Star Wars: Attack of the Clones.