Please check out the press release and video of the official announcement. 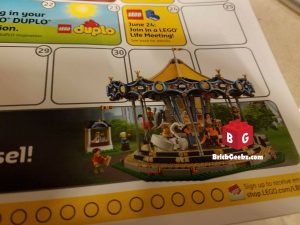 The ever alert folks over at BrickGeekz.com have found the first image of the upcoming LEGO Creator Carousel on the June LEGO Brand Retail Store calendar.

The carousel appears to include several brick-built ride-on animals including a swan, a tiger and a flamingo. There are quite a few minifigures pictured and the set has some great details in the roofline of the ride and also appears to include a non-square baseplate, unless the photo is doctored a bit.

Keep your eyes open for an announcement soon, we’re sure.