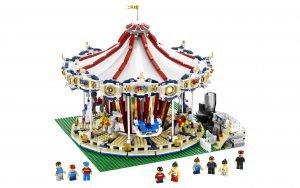 Please check out the press release and video of the official announcement.

There are reports from both news sources and respected rumor sources that this June we will get a new LEGO Creator Fairground Carousel (10256) set in our favorite stores.

LEGO has released a few other sets in their Fairground series, like the Ferris Wheel (10247) and Fairground Mixer (10244) with 2464 and 1746 pieces respectively. What can we expect from the new Carousel? Unfortunately there are no additional details. Speculation on Eurobricks forum is that it will be on the larger side, 2400+ pieces which should make a nice set. Will it be motorized? How many minifigures will there be? It’s hard to say.

Since it seems fairly solid this will release on June 1, leaked images and details are likely not very far away. Stay tuned!