The LEGO Group has started teasing us for the launch of the next LEGO Ideas project in June. The previously announced Apollo 11 Saturn-V rocket by saabfan will blast into stores this June. 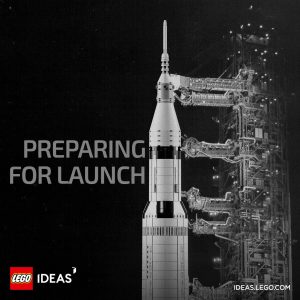 Designed to celebrate the 45th anniversary of the Apollo 11 moon-landing, the original Ideas model was 130 studs high (1:110 scale) and contained 1179 bricks.

No details of how the final set will appear or what will be included were shared by LEGO on Facebook, and they’ve been pretty stealthy in their replies to comments. We’ll just have to wait and see what they reveal in the coming weeks.