I picked up the Fire Truck Ladder (60107) just before Christmas when a local store had a 20% off sale, and I was pretty impressed with it while building it. The attention to detail and simple building techniques made it stand out.

Now, to be fair I haven’t built a LEGO fire set of any kind since probably the early 90s and the set was likely a bit older than that. As part of the large town my brother and I built in the basement, we had a good presence of police and fire. 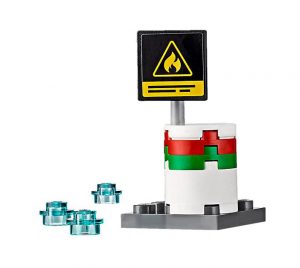 Building 60107 starts with the 2 minifigures and the oil-drum fire. The minifigures are great and very detailed. There’s one male and one female firefighter included in the set. The oil-drum fire didn’t impress me as much. The drum is pretty basic with just 4 round pieces put together, and then translucent flames on a 1×2 plate that sit on top. They don’t attach. I dismantled it after finishing the set and cycled the pieces into my collection.

The truck is a nice bit of engineering and feels absolutely right for a LEGO city or town. The truck has all the parts you’d expect, a nice long hose with a place to hang it, an extendable ladder that swivels 360 degrees and the hose uses a stud-shooter to shoot water at the fire. I guess that’s why the fire elements aren’t connected to the barrel…

The tilting mechanism used to raise and lower the ladder is more complicated than the standard hinged piece I was used to. The multiple Technic pieces provide a really stable lift while the use of the faux-pneumatic pistons provide a very smooth and controlled movement.

Adorning the truck are the requisite safety lights and accessories like an axe, radio and a fire extinguisher. There are a few stickers to apply, mainly on the front and back bumpers of the fire truck and the warning sign with the barrel. The roof of the cab pulls off easily to put one of the figures in as the driver.

For a small set of 214 pieces, the price at $24.99 US is a bit high if the rule of $0.10 per piece is applied with this set coming in about $0.12 per piece. Some of these pieces may be higher value – the Technic arms in red, the hydraulic assembly etc. I think this set provides some great play options and would look nice as part of a diorama or street scene so the price doesn’t put me off this time.