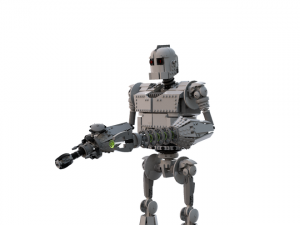 Imagine a cast like Jennifer Aniston, Harry Connick Jr. and Vin Diesel being directed by Brad Bird (Mission Impossible: Ghost Protocol, Ratatouille, The Incredibles) about a giant robot from outer space, who doesn’t want to destroy us!

The Iron Giant was released in 1999 and while it was overshadowed by movies like The Matrix, Toy Story 2 and Star Wars: Episode 1 that year, it found a solid following of people who enjoyed the positive message of the film. Today the mix of CGI and animation feels a bit dated, but there is no doubting the popularity of this film.

Iron Giant fan Brett Cuviello has submitted a 2000+ piece model of the robot to the LEGO Ideas project, hoping to become one of the next builders with a set chosen by fans and The LEGO Group to become an official set. Like all LEGO Ideas sets Brett’s model needs the support of us fans to move into the finals. Right now the set stands at over 2100 supporters and is well on it’s way to the 10,000 needed for LEGO to consider the set.

“The Iron Giant with changeable eyes and weaponry to depict his evil state from the movie, Hogarth Hughes with the alien bolt he finds at the end of the film, Annie Hughes and a coffee pot, Kent Mansley and a fedora, and Dean McCoppin with a coffee cup. The entire build consists of approximately 2,023 pieces, including the Giant, minifigures, and accessories. The Giant’s head rotates and tilts, and his arms, legs, wrists, hips, and ankles are all articulated to both accommodate his size and weight, and allow him to replicate classic poses from the movie.”

Be sure to visit The Iron Giant on LEGO Ideas and lend your support of this set.