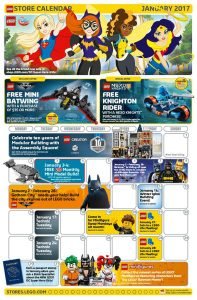 Users on Reddit and PromoBricks have posted an image of the January 2017 LEGO Store Calendar and there’s a heavy focus on Batman and the Super Hero Girls launch.

Not only is the bonus of the month Batman focused with a nice little Batwing, but they announce the launch of the LEGO Batman Movie Custom Minifigure line for January 1 and two challenges: Build a Gotham City skyline and Find Batman minifigures hiding around a LEGO Store.

There’s nothing much about the DC Super Hero Girls launch on the calendar, but they are the main header. The sets are starting to appear in stores now if you’re lucky.

Of course, we also have the launch of the new Assembly Square modular building and the monthly VIP Mini Model build.

We’ll link to the PDF document as usual when it’s posted.