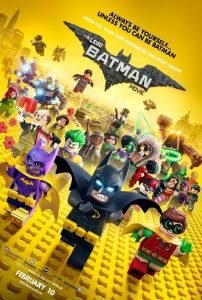 Warner Bros. has released a new poster for The LEGO Batman Movie which is coming out on February 10. The poster features Batman, Robin and Batgirl prominently in the foreground and a ton of villains behind them. You can click the image to the right for a larger view.

What’s also interesting is the on the left side of poster we see Green Lantern, Hawkman and Superman, with Flash below them, and Wonder Woman, Martian Manhunter and Aquaman hiding on the right side. I hadn’t heard a lot about them being in the movie, and have to wonder why they’re seemingly running with the crowd chasing our Bat-heroes.

The villain list is too long to run through, but we definitely have The Joker, Harley Quinn, Bane, Clayface, The Riddler, Penguin, Catwoman and Poison Ivy.

With all of the character depicted, the movie is sure to be fun and chaotic, just like you’d expect.

Don’t forget that on January 1, we will see the release of The LEGO Batman Custom Minifigure 20 piece set, and more building sets too.