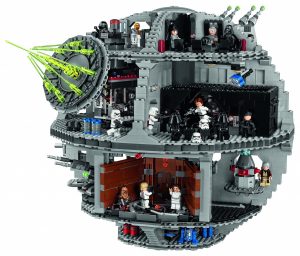 Yeah, the headline’s a bit cheeky, but I’ve grown tired of waiting for this news amid the false starts, so I’m a bit jaded.

Not to say the set isn’t pretty awesome for those of us who missed the original, but at $500 US ($600! CDN), I’m not sure it’s on my wishlist for a while. Check out all the great photos below the press release.

Win the battle for the Empire with the awesome Death Star!

• Load up and fire the turbo laser’s spring-loaded shooters to keep the rebels at bay.

• Battle the Royal Guard in the throne room and then take on Palpatine himself!

• Help Leia escape from the detention block and swing to safety with Luke across the chasm!

• Will Obi-Wan shut down the tractor beam and help the rebels defeat the Empire?

• Can you spot the Dianoga trash compactor monster?

• Recreate other unforgettable scenes from the classic Star Wars films.

• The perfect addition to any LEGO® Star Wars collection.

• This set offers an age-appropriate building experience for ages 14 and over.

Available for sale directly through LEGO® beginning
September 30, 2016 via shop.LEGO.com, LEGO® Stores or via phone.