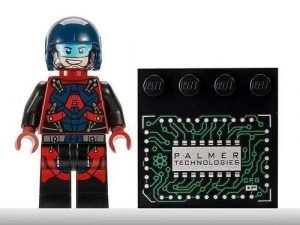 Here’s another SDCC exclusive that’ll get people all fired up, both good and bad. LEGO will be giving away exclusive minifigures of Atom at San Diego Comic Con (SDCC).

Atom is Ray Palmer, played by former Superman Brandon Routh, in the CW series DC’s Legends of Tomorrow. He was originally a character on Arrow alongside Green Arrow and the Flash among others. In Legends of Tomorrow, he’s joined by Hawkman and Hawkgirl, Firestorm, Captain Cold, Heat Wave and Black Canary to fight against legendary bad-guy Vandal Savage.

The Atom minifigure will be given away on Thursday, July 21 and on Saturday, July 23 in the Pavilion Terrace and on Twitter if you’re not going to SDCC.