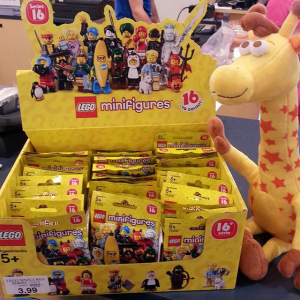 Over the weekend there were a number of reports and pictures from across the internet claiming and showing that CMF Series 16 was already released, even claiming them to be in LEGO Brand Stores.

The logic behind why these might be out now seems sound – that LEGO will re-release the Disney CMF series in September with the recently released Disney Castle (71040) set to boost sales of both – although the CMF series flew off the shelves, so it doesn’t need help, and it would feel like a marketing plan gone wrong to me.

Is Series 16 out there? Maybe. It’s odd that LEGO has not yet published any kind of announcement about this, not even an official announcement that the set would be coming out this year. So what are we seeing?

According to CM4Sci on Eurobricks (a very reliable source), here’s the character list and box breakdown. Note, there’s plenty of Banana Guys to go around, but there’s some others that will be popular and harder to find.