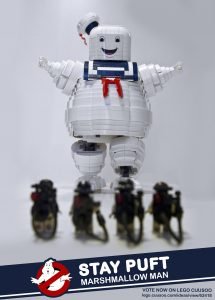 Some say that Brent Waller is largely responsible for pushing LEGO into the Ghostbusters theme when his LEGO Ideas project became the first set in that theme, LEGO Ghostbusters Ecto-1 (21108) which later spawned the official LEGO Ghostbusters series with the Ghostbusters Firehouse HQ (75827) and the new Ecto-1 & -2 (75828) from the 2016 movie as well as the character inclusion in the Dimensions game (71233).

Another LEGO Ideas project was built for Ghostbusters and that was a large Stay Puft figure to go along with the Ecto 1, and this model was also designed by Brent Waller, but despite reaching 10,000 supporters, LEGO decided not to produce it. It is an impressive model, even when broken down to the raw numbers:

So? Want one? Sure you do! It would look great rampaging through a city being chased by either the original or modern Ghostbusters! Lucky for us, Brent decided to share his LDD (LEGO Digital Designer) file, sticker templates and parts list so that we can all build our own!

You can find all the details on Brent’s site: Waller Customs

The downside to this, not Brent’s fault, is that LDD isn’t great at generating real instructions, and also ignores some real-world building techniques, so as he notes on the page, this is a “guide” only and you should feel free to make any changes you like. You should have some knowledge of how to order parts (Brinklink for example) and be able to learn how to use LDD. The basics are on his page and the rest takes a little bit of experimenting, but nothing too challenging.

Feel free to post back here with pictures of what you create! I’d love to see a LEGO Friends themed Stay Puft.

2020 Build To Give – Gingerbread Man Instructions