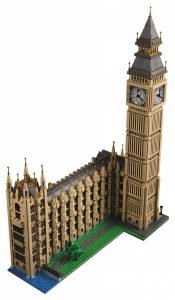 Yesterday we reported that details of a new LEGO Creator set had leaked, someone jumped the gun on Twitter, and we’re now happy to report that 10253 Big Ben is officially announced.

This massive set is the 5th highest piece count LEGO has produced and the 2nd large set this year after the Ghostbusters Firehall HQ. At 4163 pieces, the Big Ben set features some unique details, tons of repetitive steps and an amazing level of details that really brings the set to life.

The set is being released this year to tie in with the new flagship LEGO Brand Store being opened in the UK this summer.

Here’s the official the press release text for the set:

Get up close to Big Ben! The clock was first started on May 31st 1859, and Big Ben’s first chime rang from the 96-meter Elizabeth Tower on July 11th of the same year. This over 23” (60cm) high LEGO® interpretation of the iconic structure is a tribute to its engineering and architecture. It features a detailed facade with statues, shields and windows, and a clock tower with 4 adjustable clock dials and a removable roof allowing access to the belfry, plus buildable exterior elements including a sidewalk, lawn and a tree depicting the building’s location. This model makes a great display piece for the home or office. 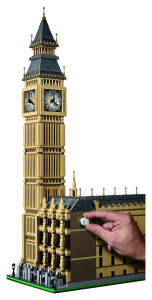 The price on this set is much lower than expected. The reports yesterday suggested $349 USD but the official price is $100 LESS than that, making this set a pretty decent value for money. The press release also doesn’t mention that LEGO VIP members will get early access to ordering the set on June 15.

One detail I’d like to mention is the adjustable clock face. The clock tower features clocks on all 4 sides that are not only linked together, but simultaneously adjustable using a small clock/knob on the back of the set. It seems simple enough, but what it means is that as you build that portion of the palace and the upper portions of the tower, you’re connecting pieces (probably Technic style) throughout to enable the mechanism to work. The top of the tower is removable, like a modular building, to give a view into the workings of the belfry.

Another thing to note is the scale of this set. It’s sufficiently large that if you displayed it beside the Tower Bridge set (10214), it would match up fairly nicely.

I’m excited for this set. We have absolutely no place to put it, but it’s such a unique and interesting set it might be worth just putting into storage until we do.