As reported on several forums, we now have official word that the LEGO System has cancelled its licensing deal with Disney over the Star Wars product line. Along with the immediate cancellation of all future sets, current sets are being removed from store shelves around the world and will not be for sale effective immediately.

The LEGO System took the further step of issuing an immediate recall on all Star Wars products bearing the LEGO brand name. This includes video games, building sets, characters, books and clothing and related merchandise. LEGO will be sending out pre-paid return labels to everyone who has ever purchased a LEGO Star Wars product to facilitate the immediate return of the now illegal products. 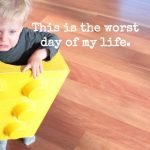 “It’s entirely unprecedented,” said one toy store employee who wished to remain anonymous. “We’ve never seen a recall of an entire product line happen so quickly and so forcefully.”

We’re not sure what has happened with this particular license to cause such a drastic and immediate action, but we will have more information as we find it. No word yet how this applies to the recently announced Disney Minifigure set or any other crossovers.

Just a few minutes ago, we received the following press release from The Disney Group:

“We want to thank the fans of Star Wars and the brick building toy we had previously licensed to represent that brand, your support over the years has been wonderful and nothing short of invigorating to us.

Unfortunately as of today we must immediately and retroactively revoke that license agreement due to several and various egregious actions taken by members of that association. Their activities are not in line with the ethical standards required by our legally binding agreement and don’t represent the beliefs of our company.

We hope that the consumers who have supported Star Wars over the years will understand our position and continue to support Star Wars merchandise by purchasing one of the hundreds of other licensed products produced by companies more in line with ours.”

You can see the full press release here.