Since exiting my “Dark Ages” almost all of the sets I’ve bought and built were smaller ones. Until now, The Tumbler (76023) was the biggest set I’d built and it was 1869 pieces and takes up an entire shelf on our TV stand. This time out, I decided to go bigger and bought the Palace Cinema (10232), which is even bigger than the Tumbler but so much more fun to build.

I chose the Palace Cinema over some of the other modular sets partly due to its age. As one of the older modular sets still available in stores, there’s a chance of it being retired soon and I didn’t want to miss out. The main reason is that I spent many years managing movie theaters and still work adjacent to the film industry, so I’ve had a love of classic theater buildings for a long time. I love the new multiplexes as well, but none of them have the character of the older buildings.

The set contains 6 minifigures which LEGO calls a child star, chauffeur, female guest, male guest, photographer and cinema worker. Not shown in the picture here is the limousine in which the child star and chauffeur can be arriving.

Most of the pieces are in a couple of shades of brown as seen by the colors in the architecture. This can be a bit of a problem when building if your lighting isn’t good as discerning the difference in the printed instructions can be a bit tricky. LEGO does a decent job of keeping like colors together in the parts list on each page, but I found it a bit of a problem. I prefer to use my iPad when building these sets as I have a much better ability to zoom and control the brightness. Most of LEGO’s building instructions are available on their website.

The pieces of this set come fairly well-organized. There are 3 books of instructions and the bags are numbered 1, 2 and 3 – but be warned, each step has several bags, and a few of the bags have bags within them. Organization on your part is key. I learned a few tips to make my next build (Parisian Restaurant or Detective’s Office?) easier, but since everyone has their style, I’ll keep those to myself.

Note that there’s a few stickers for this, and I did a poor job of applying some. Primarily the marquee over the doors. The sign is made up of 2 pieces and there’s a large gap between them. It’s hard to get them positioned close enough, and I got one on at an angle, so I have to try to fix that. 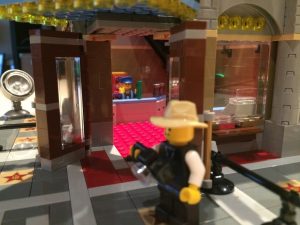 This build took a long time, in my opinion. Having only built something like this once before, I was a little unprepared. I think I spent the better part of 6 hours on it. The first steps seemed to take forever – building the limousine and tiling the “sidewalk”. The limousine build took me back to my childhood as it’s a fairly straightforward LEGO car. The only thing I really loved was the front of the hood, with its tapered grill and hood ornament.

The tiling looked like it was going to be tedious and need a lot of attention, but as usual LEGO kept the steps simple and repetitive, which was good in this case. I love the “Walk of Fame” type stars that are printed on the bricks and made sure I had them all facing the same way, a little OCD but it helped. For me, the corner in front of the theater was the origin, so they all pointed away from there. Too bad they’ll end at the end of the block since I don’t think there’s any easy way to obtain more.

The foundation of the building was a pretty simple layout with a couple of neat tricks. One I loved was the sweep of the stairs in the back corner of the lobby. You stack a couple of 2×4 black tiles to achieve the sweep before using some pre-fab stairs. It’s a nice, glamorous touch, in my opinion. The main floor also features some nice swing open doors at the front, a fully stocked concession stand and a ticket area with both inside & outside sales. 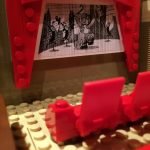 The second floor features the theater itself with the screen, seats and projector located here. At first the projector sitting on a platform seemed odd to me, but I realized it’s not only easier to build it this way, but was often the way it was. I loved the ornate frame around the movie screen, the simple but effective seats and the way the projector looks. 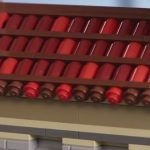 The final level is the rooftop and perhaps one of the more ingenious parts of the build. The adobe-style tiles are created as a wall with axles in the bottom corner. When you build the walls, you actually position the receptacles high on building wall and then flip the tile wall upside down! to rest at an angle creating the appropriate roofline! Genius.

By now, I think you know I love this set. The LEGO Palace Cinema is one of my favorite sets and I’m happy to now have it in my collection. Of course, that means I have to collect more modular buildings which won’t make my wallet happy.

If I had any complaints about the set it’s more in the “real world” problems of it. Who builds a movie theater with big giant banks of windows in the theater room itself? I know this is a choice they had to make so you could see into that level, but it still bugs me a little bit. Maybe I’ll modify it to have some curtains or something.

I found a really interesting MOD to this set from Jean-Marc at NovaLug.ca, where he combined 2 sets and extended the building out and up giving it a much more grand appearance. He shared his awesome creation on BrickShelf. 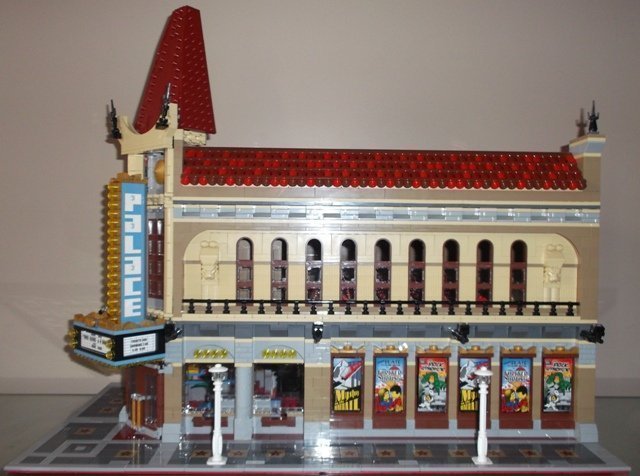