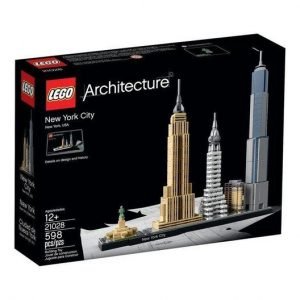 New Year’s morning I ventured out to the nearest LEGO Brand store before opening (about 20 minute early) and found a short line of about 20 people waiting for the store to open. Once it did, it seemed like everyone else arrived to buy the Ghostbusters Firehouse and the Creator Brick Bank, sets I’m bypassing for now.

I picked up 2 of the new Architecture sets – the New York City and Berlin skylines, and will talk about the Flatiron Building

I’ve never been to New York City, but the skyline is so iconic and so frequently seen in movies and on TV that most everyone will recognize it and the buildings represented here. Anyone who knows New York City’s skyline well will realize the positions of the buildings don’t make sense relative to each other, but LEGO is presenting this as an artistic set, not reality.

The building shapes evoke that feeling of New York City which is hard to do when you’re confined to LEGO elements that exist, and an incredibly tiny scale model. Overall, I like the way this set presents.

The buildings represented here are the Statue of Liberty, the Empire State Building, Chrysler Building, the Flatiron Building and One World Trade Center

I found the build easy, but pretty creative in places. It probably took around an hour or so, but I wasn’t watching. Certainly not much more than that. There’s some pretty creative use of bricks on the One World Trade Center build, to build a couple of cores that the outer facade hangs from. OWTC itself is connected to the base by 2 grabber hands, not on studs itself.

The Statue of Liberty is pretty basic, the island isn’t too complex and the Flatiron building is just boring to build – just series of dots and triangles stacked 10 high. The other three buildings do offer a bit more challenge but the Empire State Building and the Chrysler Building are really just stacking similar layers on top of each other.

There are no stickers in this set. There is on 1×8 or 1×10 tile that comes with “New York City” screen printed on it.

I can see some people wanting this set for parts only. There’s a LOT of repetition so you get the parts you want in quantity. I’m not sure what parts are popular, but the tan grill pieces on the Empire State Building are plentiful as are the clear 1×2 pieces in the Chrysler Building. The large grey tiles used on OWTC would probably be popular too. Overall though, the price is a bit high to use it just for parts.

I’m back and forth on this one. In many ways I love the overall look of the set, but for the price tag ($59.99 USD) I expected… more. The Architecture series up to now has focused on a single building and done it well. Falling Water is amazing, as is the United Nations, and Trevi Fountain is challenging to build and maintained its character.

Each of the buildings here presents well, and it will make a nice desk display, but I think I prefer the single buildings in the end.