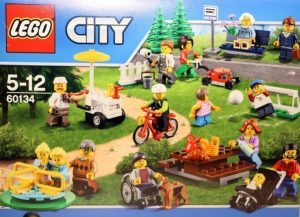 At the recent Toy Fairs in Nuremberg and London all the new LEGO sets have been on display, including a fairly innocent looking set that has since caused tons of media coverage over something most people don’t even think about.

Until now, LEGO has never produced a minifigure in a wheelchair or visibly showing any kind of disability, which has understandably caused some people to question why it’s never been done. The new LEGO City set 60134 – Fun at the Park features quite a few minifigs and in particular a boy in a wheelchair with a dog, possibly meant as an assistance animal.

In April 2015 British Journalist Rebecca Atkinson began the #ToyLikeMe® campaign after noticing that there was a lack of representation for children with disabilities. From their crowdfunding campaign page they say:

“We’re standing here, teeny weeny toy ‘cap in hand’ to ask you to chuck in yer change, wave us yer wonga, to help us make the toy box a better place for 150 million disabled children.

#ToyLikeMe would like to raise funds to take us to the next level, grow our organisation and develop, design and run a website – an online hub –  and turn our viral social media campaign into a lasting online resource which will celebrate disability in toys, advise parents and carers looking for representative toys and continue consulting and calling on the global toy industry to include disabled children in the cultural mainstream. We want to keep our work going to make real change, but we need your help!”

#ToyLikeMe wants to enlist the support of all major toy manufacturers in representing disabilities in their product lines.

A lot of people are making assumptions about the origins of this figure and whether it ties to the #ToyLikeMe campaign or if it’s simply an internal decision by the LEGO group, who have been silent on the issue so far. The argument against this being pressure from #ToyLikeMe is that they’ve been around under a year, and a LEGO set would have been in production before that.

I’m not sure which came first but it’s hard to argue this is a step forward for recognizing people with varying disabilities. Some would be hard to represent in a minifigure but this is a big step forward for kids in a wheelchair especially, to feel represented in a toy.