I’ve had LEGO since before I can remember. My parents have told me stories, and I’m sure they’re correct. Starting this site got me thinking about the first LEGO sets I had. Let’s take a trip down memory lane, shall we? 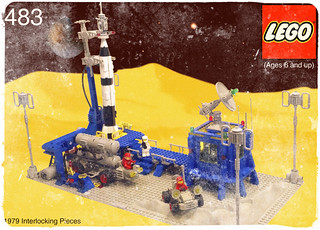 One of the first sets I remember getting was 483: Alpha-1 Rocket Base which my brother and I were very excited to get while we were on a family trip to Montana. The set was released in 1978 but I think it was more like 1980 when we got it. We went on a bit of space kick and very shortly after got 493: Command Center and also 497: Galaxy Explorer.

At some point, my brother decided he didn’t like the space theme and went more for the town sets. One of his first sets was the 775: Fire Fighter and that set us down the path of realizing that the town and space sets could work together to create an even bigger play space and story. So that’s where we went next… we went to town.

Eventually my brother and I took over the crawlspace in our basement. For those wondering, it was a partly finished space. Concrete floor and clean, but only wooden studs on the wall, no insulation, and only about 3-4 feet high. In that area, we spent a LOT of time building LEGO sets. Some we bought, others we created ourselves. We got into buying used LEGO and got some good deals on that. It helped us build out our collection. I wish we had pictures, but I don’t. We had a monorail running around the city (2 sets I think), and a ton of roads. We even built a football stadium that was so huge, we had to rethink it a few times to reduce the number of bricks required, and support it internally. We even built in a store and concession.

I miss those days. Relatively carefree, I was working and going to school, but had few responsibilities. My brother and I became good friends during those years, all because of our shared love of our first LEGO sets.