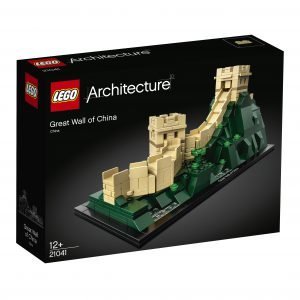 At about 1/3 of the pieces of it’s cousin set, the Statue of Liberty, the Great Wall of China brings a new feature and is a very impressive addition to the LEGO Architecture line up.

There’s a commonality between the Statue of Liberty and the Great Wall sets, and that’s their color palette. Both sets feature primarily tan and green, with the Great Wall using the lovely dark green color to represent the Chinese forests and tan profile bricks along with a couple of other elements for the wall itself. It’s a small model but I’d have liked to see some grey or dark grey pieces for rock instead of everything being green. Maybe I’ll modify one a bit.

One of the most interesting things about this model is that it’s expandable. If you collect multiple copies you can string them together to create a much longer (but slightly repetitive) wall.

The full gallery is below the press release.

Stretching thousands of miles across Northern China, the Great Wall is the world’s longest human-made structure and was once manned by over a million guards. Now a World Heritage Site and popular tourist destination, the wall was built and rebuilt between the 5th century BCE and the 16th century to protect the northern borders of the Chinese Empire. This detailed model depicts two turrets joined by a winding section of the wall atop a dark-green mountainous landscape with lush valleys, trees and lakes, and is finished with decorative English and Chinese nameplates. Discover the clever building techniques that allow the wall to drape the countryside, curving up, down and around mountains and rugged, undulating terrain. Connect multiple models to expand your Great Wall display.

ABOUT US
A small but dedicated band of LEGO enthusiasts, we report on LEGO news, events, ways for you to have more LEGO fun. Join us as we continue our journey with LEGO.
Contact us: info@brickbrains.com
FOLLOW US
© Copyright BrickBrains.com - LEGO® is a registered trademark of the LEGO® Group and does not sponsor or endorse this site. equipment-traffic
Pin
Tweet
Share10
Share
Share