If you’re around the LEGO community long, you’ll hear the word “LEPIN” and others referred to with a degree of disdain. LEPIN is a Chinese company known for copying LEGO sets and selling them much cheaper. 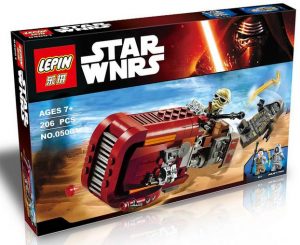 They’ve released most Star Wars sets as “Star Plan” or “STAR WNRS” (see the image to the left) but are basically identical to the LEGO version. They’re cheaper not only due to using non-LEGO parts, but also not bound by the licensing agreements that LEGO is.

The copying isn’t limited to the Star Wars license, but pretty much any LEGO set. A quick search reveals Creator Experts sets, IDEAS, TECHNIC and more. They also have reportedly “stolen” designs created by AFOLs and then sold those sets while not paying the designers.

The lax copyright laws in China have been something that many companies, not just LEGO, have struggled with. As outlined below, being a “well-known” trademark gives LEGO some degree of legal standing to begin fighting back against the infringement being conducted by LEPIN and other such companies.

Not all fans are entirely against companies like LEPIN. They see it as a way to get a set for a much lower cost than LEGO sells for, that would be expensive to assemble via BrickLink or just isn’t available any more.

The following is the release from LEGO on November 1, 2017.

The Beijing Higher Court passed a ruling earlier this year [July 22, 2017] that recognises the LEGO® logo and the LEGO name in Chinese as ’well-known’ trademarks in China. The well-known trademark recognition is an important milestone in getting broader protection for LEGO trademarks in China. This means that the LEGO Group is now in a better position to act against infringement of LEGO trademarks, also outside the toy category.

Peter Thorslund Kjær, Vice President, Legal Affairs in the LEGO Group, said: “The ruling by the Beijing Higher Court is very important for the LEGO Group. It reflects the significant effort and investment put into marketing the LEGO brand and products towards the Chinese consumers, and it further reduces the risk that consumers in China are misled when they see the LEGO logo or the LEGO name in future. We are now in a better legal position acting against infringement of LEGO trademarks and defending our trademark portfolio.

“We see this as a recognition of our status in China as a known and loved brand by parents and children, and we appreciate the support from the Chinese government and authorities to ensure the continued protection of millions of Chinese consumers as well as our unique trademark and logo.”

The LEGO Group actively protects its trademarks globally and each year brings relevant cases to courts to ensure that consumers can always trust that a product carrying the LEGO logo or featuring the characteristic LEGO design is genuine.

“Since 1932 the LEGO name and the LEGO logo have been a guarantee of the highest safety and quality standards. We are committed to doing what it takes to protect children and assure parents that when a product features a LEGO logo it will offer the best quality, as well as be great fun to play with. We will continue to take action globally when we see attempts to mislead consumers and infringement of our trademarks and copyrights,” said Thorslund Kjær.

What consumers can do to ensure they get a genuine LEGO experience: