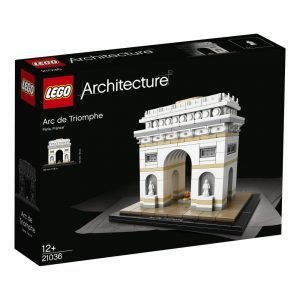 Amazon.fr is taking pre-orders for the new LEGO Architecture set Arc de Triomphe (21036) with an availability date of August 1 for the release.

The site gives almost no details about the set yet, simply stating (translated from French):

“It also includes a gold plaque to represent the tomb of the unknown soldier and a LEGO interpretation of the eternal flame, which is re-lit in Paris each evening to commemorate the victims of the war.”

There’s a few interesting techniques shown in the first photo below. Interesting use of different plates for the uppermost tan layer, inverted tiles used for the grey recesses above the statues, and that gold dome representing the tomb and the eternal flame. As with most Architecture sets, this one features a lot of tiles and plates with fewer full bricks beyond 1×1 or 1x2s. However there seems to be a large 1x2x3 column piece used in both white and grey.

The pre-order price is 49.14 € including the VAT with no word on the regular consumer price or North American availability. European LEGO boxes also don’t include part counts, but our original report from the Nuremburg Toy Fair said it was 386 pieces.