UPDATE: The Millennium Falcon has been officially announced by The LEGO Group.

Today, floating around the internet there are some really terrible, blurry and grainy pictures of what claims to be a new Millennium Falcon UCS (Ultimate Collector Series) model. NOTE: We don’t link to leaked images and this one is being scrubbed from Google, Reddit and other sites as quickly as emails can be sent.

The image kind of looks like it could be true. The box in the background appears to be correct for the new Star Wars: The Last Jedi in that it’s white like the packaging designs LEGO and Disney have previously displayed. 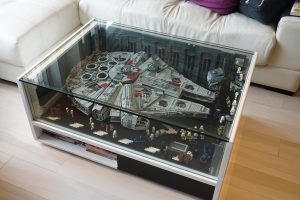 If, and that’s a big if, the image is correct, the ship will be significantly larger than I would have thought. It’s possibly on the same scale as the previous 2007 UCS set, which was 5197 pieces and was pretty massive.

Two other factors that make it possible for the stories and rumors to be true are: the inclusion of the ship as a major point in both Star Wars: The Last Jedi and the upcoming Han Solo movie. The Falcon will play a central role in both films according to Hollywood insiders.

Unfortunately the reality is that we don’t know just yet. The existence of the photo, if it’s real, should mean that we’ll definitely see an announcement over the summer and release of it in connection with Force Friday in September.